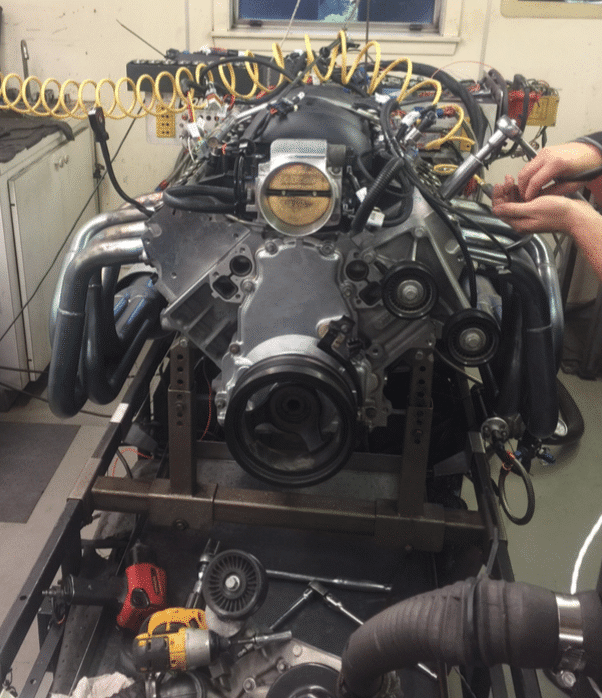 The test “mule” was a stock LS3 apart from a set of Diamond PN#11545 pistons with 2CC valve reliefs. This allowed us to experiment with different cam profiles and head combos without dealing with PTV during testing.

We baselined the set up with a stock intake, cam and heads. We calculated the CR at 10.36 on a 70 cc chamber using a stock .051 gasket and 11.1 with a 66 cc chamber and .040 gasket. We used the Holley Terminator controller and harness for our ignition and fuel management. This was done for not only its ease of set up but for its closed loop wide open power enrichment feature which maintained a spot on 12.8 to 13.0 air fuel ratio during over 70 dyno pulls to 7000 RPMs. Since we were making mechanical changes which effect volumetric efficiency we didn’t want to have to dial the VE in after each change. It also enabled us to display and log all our critical engine functions such as fuel and oil pressure without having to plumb extra analog sensors to the dyno. We had the engine on the Dyno and fired up in no time. We also used a 92mm mechanical throttle body which is a more compatible with an engine dyno than drive by wire.

…the old mule baselined at 493 @ 6000 RPMs and 500 Lb ft of torque @ 4600 RPMs. Remember, no accessory load, no induction or exhaust restriction and an ideal header configuration.

Our first order of business was to dial in our SS3 three bolt product which runs a close second in sales only to our SS3 VVT. Our colleagues at Cam Motion supplied us with a selection of grinds featuring our GPI/GPX proprietary lobes ranging from 229 to 235 degrees’ duration on the intake side. The exhaust varied from 245 to 252 degrees’ duration. The lobe separation ranged from 111.5 to 116 degrees and all net valve lifts were in the mid 6s. We labeled these T-1 thru T-5 as shown on the charts. 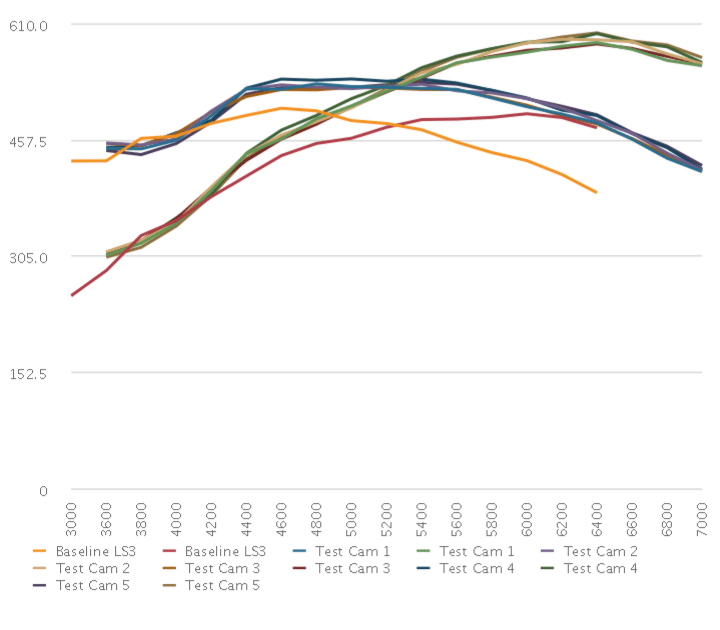 At GPI we are constantly looking for opportunities to improve our products, making our customers faster and more reliable.  If we ever stop doing this our customers should fire us. 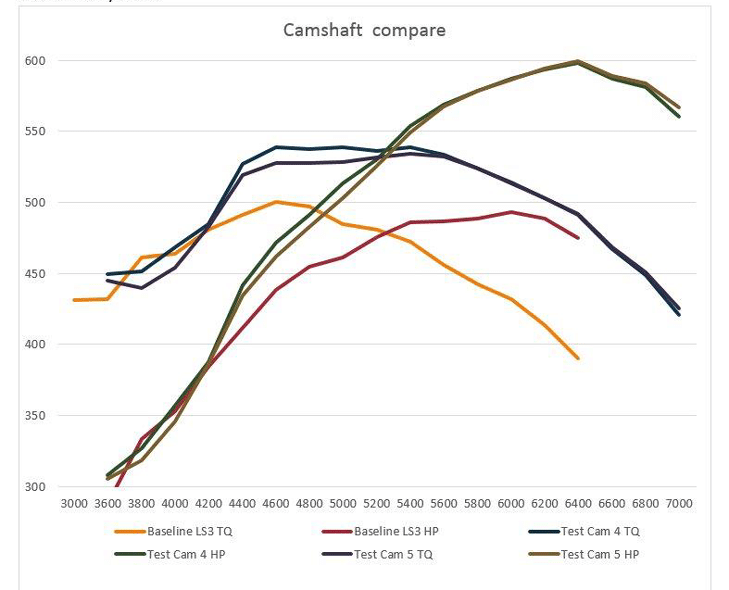 The overlay resembles a piece of yarn at first glance but when we crunched the numbers we were able drill down what would be our latest greatest SS3 camshaft. All tools have their purpose and place, a chassis dyno is a great tool for tuning and measuring installed systems such as induction, exhaust. Spintrons allow detailed measurements of valve train systems and components not possible by any other means.

An engine dyno however is essential for measuring minute changes in power and power curve independent of chassis and environmental effects. Then certainly what happens at the track keeps us all honest and is the ultimate return on our efforts. T4 and T5 peaked within 3 HP of one another with T5 actually holding its head up a bit better after peak but the 11 lb ft of torque sacrificed in the mid- range makes T4 the best choice for the majority of our clients. Well over 100 HP gain with a camshaft you can daily drive isn’t a bad day’s work in any case.

…well over 100 HP gain with a camshaft you can daily drive isn’t a bad day’s work in any case. 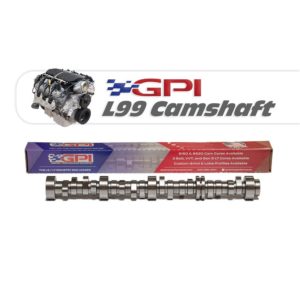 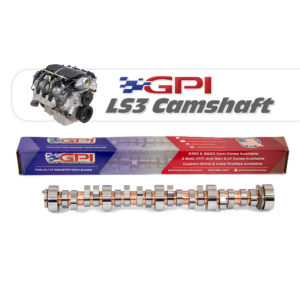 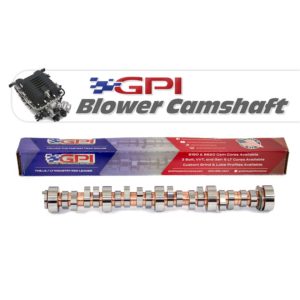 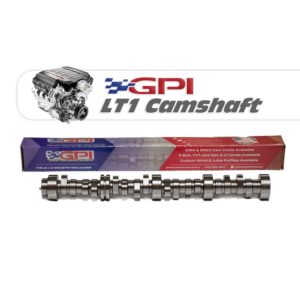 We have often wondered and been asked if porting in addition to the radius rod addition would impove the LS3 manifold. We figured it would be a great time to find out – so Mike and Ryan quickly built 2 manifolds, one with just rods and the other with the stands removed and ported. Both we and our customers have tested the radius rods on chassis dynos and at the track many times and usually see from 6 to as much as 12 RWHP. We were quite frankly disappointed with the results but it is what it is and we pride ourselves on our brutal honesty. The most we saw was 11HP at 6600. Running no induction system and a cable throttle body which pivots the opposite direction may have some unknown effect we don’t understand but here it is look for yourself. You will also notice we left the T5 cam in for the remainder of the tests in the interest of time and we were sick of swapping cams. We thought we were going to be slick and cut a timing cover in two for quick change only to discover the Camaro balancer we were using would not allow the cam to clear. Epic fail! If anyone is in the market for a nice two piece cover we have one available. 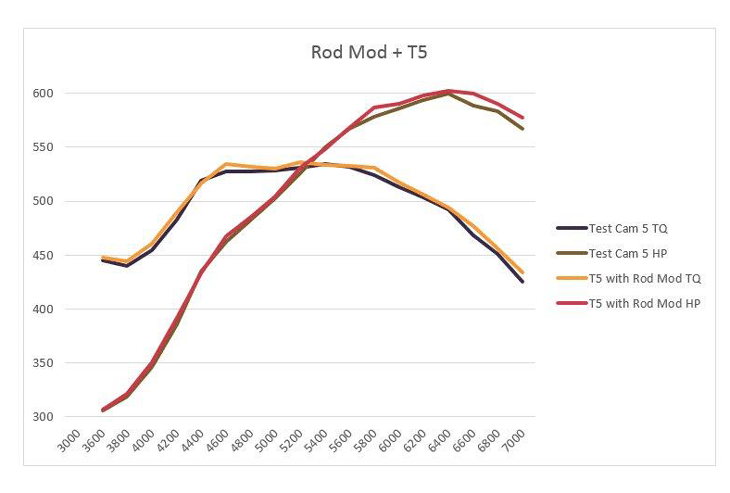 We thought we were going to be slick and cut a timing cover in two for quick change only to discover the Camaro balancer we were using would not allow the cam to clear.  Epic fail!  If anyone is in the market for a nice two piece cover we have one available. 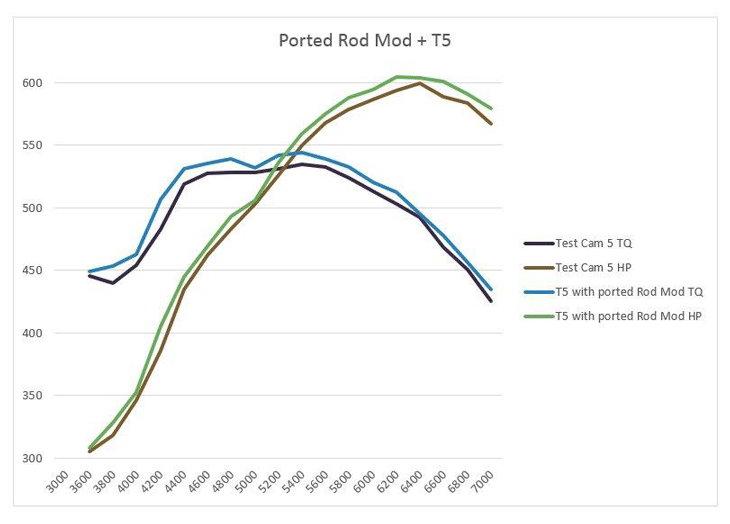 The ported version looked quite a bit better, this time we were disappointed with the positive result as the porting is very labor intensive and it’s probably going to be requested a lot going forward. We didn’t find significantly more peak power, but we got it everywhere and the midrange torque increase was worth the effort. The only negative is after the porting the manifold it is structurally impaired for any future forced induction applications. 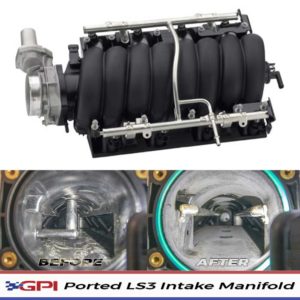 Our goal here was to determine how our heads responded back to back in comparison with some leading ported LS3 heads on the market as well as determining how much power our chamber work is worth since we consequently must increase the chamber volume. The third thing we wanted to determine was value of a little squeeze. Would working out the clearance issues be worth the gains on the average pump gas LS3?

Our objective here is not to make a competitive product look bad, as we respect the work of the good folks who bring them to market, so we have labeled the heads we tested with letters. We did note the approximate intake runner volume and tested like chamber sizes for a more valid result. If our heads suck we really wanted to know.

The first head we tested, which we will refer to as brand “Y’, was a nice looking 280+ cc runner GM casting using OEM LS3 valves. It has a CNC chamber measuring a tad over 71CC. We figured the midrange would be a little weak on a 378 cid engine due to the port volume. We find that when people start racing flow benches sometimes the end result isn’t as expected.

This head performs well on the bench and may well look better on a larger engine but didn’t do the LS3 much justice. It picked up about 10 HP at peak while losing 20 lb ft of torque thru the mid range. Now granted it was lower on compression by 1 cc than the stock head but we failed to find that equated to 20 lb ft of torque. Because we were dealing with varying chambers and compression ratios we bumped the timing in both directions up to 2 degrees to find the happy place. We also made sure the coolant and oil temperatures were the same within a few degrees. Again, this was to learn and improve rather than generate propaganda. If however at the end of the day we sell a few heads and cams I can live with that too! 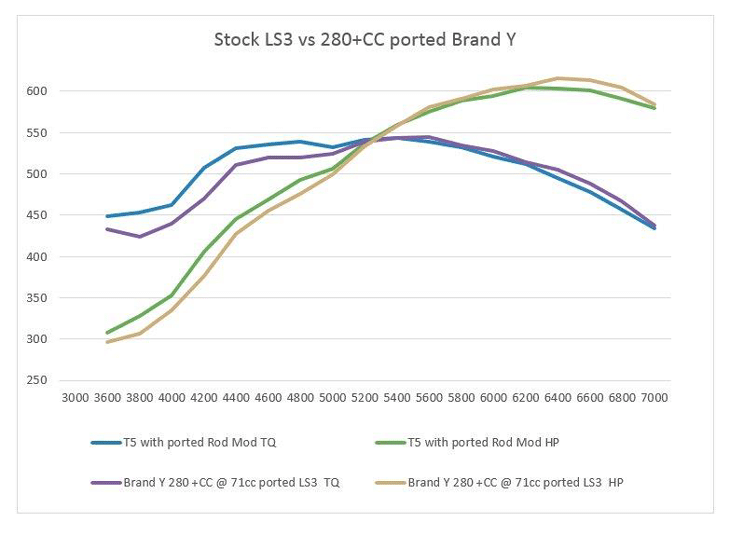 We find that when people start racing flow benches sometimes the end result isn’t as expected.

The next head we tested we will refer to as brand X. It has a runner volume in the 270s and had already been milled to 66cc. We will never know how it might have fared against the brand Y on a level field, as we didn’t have an expediant way to find out. All the same it gave us our first real glimpse during our testing to see how compression sensitive our mule would be. We figured we could test our 268cc ported and chambered head at 70cc against our non-chambered version and the stock head. Then start milling to compare with brand X. Below are the results as compared to stock, of our GPI chambered and non-chambered.

What we learned here is that our heads on equal compression picked up an honest 20hp non-chambered and 25hp chambered without giving up any appreciable midrange, thus the beauty of a smaller intake runner which can maintain air speed on a smaller displacement engine such as a LS3. We also observed that the chamber work was paying off. We noted that the chambered head did not require more or less spark advance than the non-chambered, not what I expected. Below are the results of the GPI 268 chambered heads compared to the brand X at the same compression ratio. 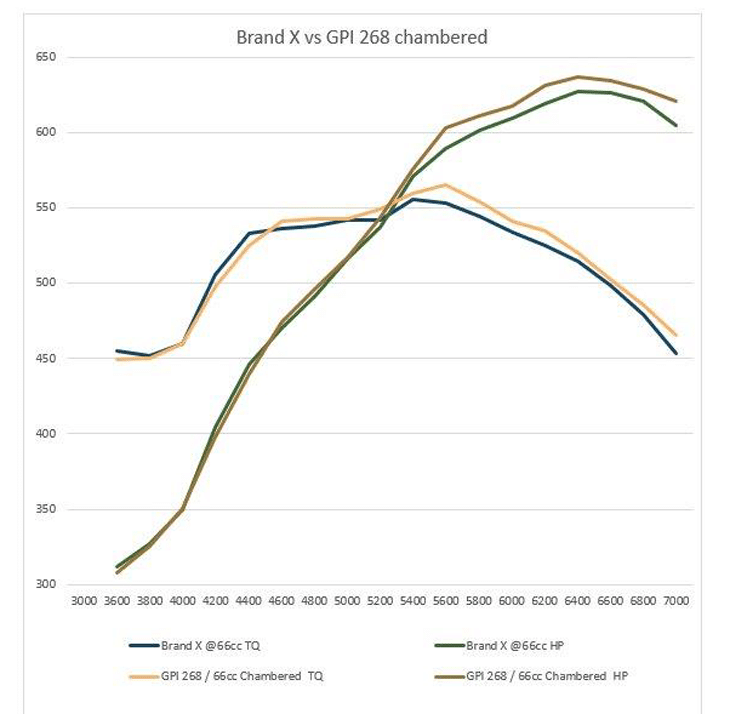 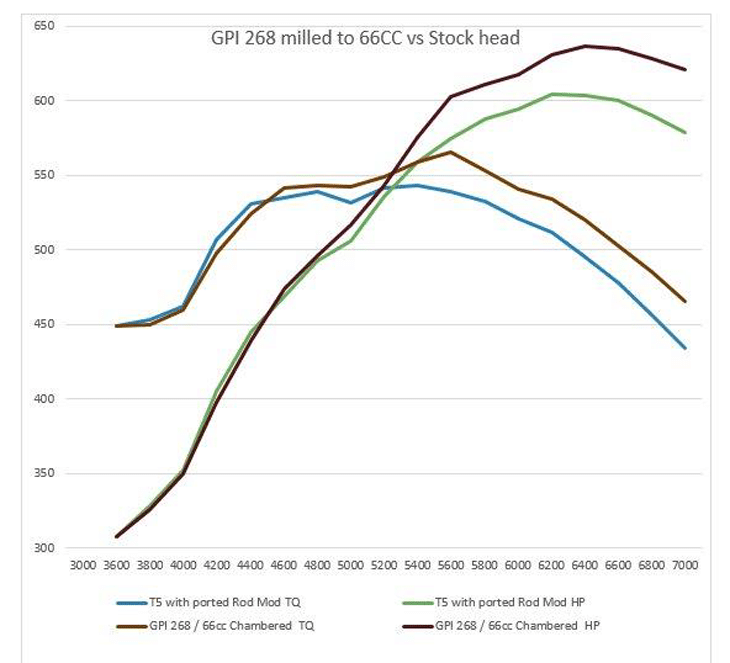 The best power opportunity so far seems to be with our 268 cc runner with chamber work and some additional squeeze. This graph illustrates the gain over stock at 66cc. We netted 34 HP over the stock head while improving torque above 4200 RPMs without appreciable loss below.

We netted 34 HP over the stock head while improving torque above 4200 RPMs without appreciable loss below!

Now for the cathedral vs Rectangular port show down. We were fully prepared for this bad dude Trick Flow to do some damage and it didn’t disappoint. We have ran these things on some forced induction and nitrous builds that did the work. In our minds however, after the dust settles our good ol LS3 factory casting with a little GPI magic and an OEM intake is a great choice for the average LS3 owner! Our next step based on this testing will be to work out a solution to achieve improved compression on the SS3 equipped LS3 and L99 without fly-cutting valve reliefs or perhaps do a better job taking the mystery and tension out of the fly- cutting process. 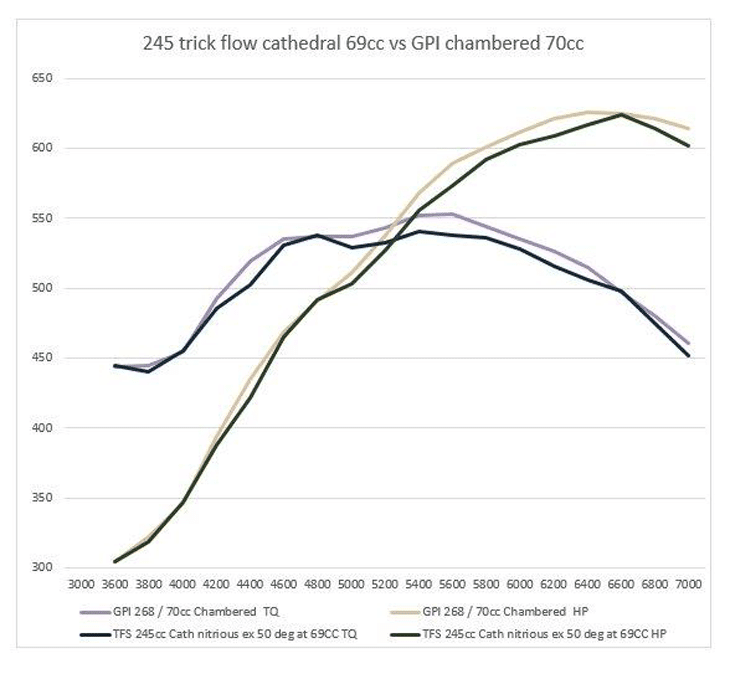 …after the dust settles – our good ol LS3 factory casting with a little GPI magic and an OEM intake is a great choice for the average LS3 owner! 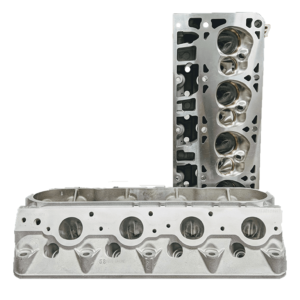 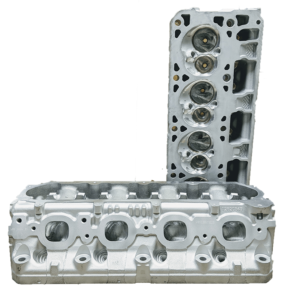 I would like to take this opportunity to recognize and thank our team members and support network. To Ryan Stevens the best calibrator and envelop pusher I know. GPI would likely be bolting on headers, blowers and someone else’s camshafts without your passion and never ending persistance to reach higher and go faster. P.S. you still owe for those half dozen engines you destroyed trying to find another tenth! To Scott Sanders “Mister Corvette”, Mike Pestka who we can always count on, James Zajac, “Mister street rod”, to “where is my parts” Nathan Moore, and my right hand for a long time, John Sims. Thanks to Josh Hamilton for his efforts in parts sales and our soon to be launched new web site. To our friend and comrade Jim Kuntz for your wisdom and seemingly never ending intuition on air flow, port shape and all things that equal horsepower. A big thanks to the following great people and companies: Kip and the Cam Motion crew Rick Anderson and the Holley Team Randy Curtis and Diamond Pistons The Kuntz and company crew Lance Smith and Craft Performance engines Brian Tooley Racing Comp Cams Harold Gwatney, Jamie Cobb, and the Gwatney Chevrolet crew Everyone else I have forgotten!